How to unlock Samsung tablet

If you have forgotten the Password block of the tablet, you can remove it by following at least two different paths: the first is to use Find my device, a service from Samsung available online, and the second involves the use of the Recovery present "standard" on the tablet. 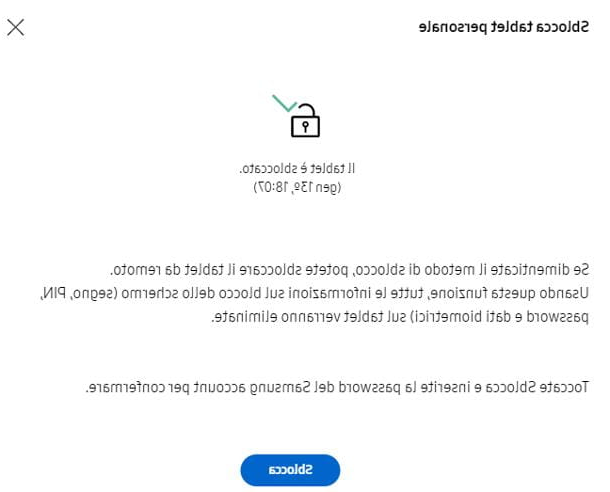 As I mentioned a little while ago, Find my device di Samsung Cloud is an online service of the Korean manufacturer, which allows you to perform some emergency operations on tablets (but also on smartphones, wearables and all other devices produced by the company), including localization, restoration and deletion block data. For everything to go well, it is essential that the tablet meets some specific requirements, which I list below.

If the tablet meets these requirements, you can proceed with the emergency unlocking via the web, which has no consequences on the stored data: first of all, therefore, make sure that the device is turned on and correctly started, connected to this web page from any browser you prefer, press the button Log in and enter your credentials Samsung account in the appropriate boxes.

Once this is done, press the button again Log in, accepts the terms of use of the service by pressing the buttons Continue e Accept, and wait a few seconds for the emergency toolbar to fully load.

To delete all lock information from the tablet and thereby unlock the screen immediately, click the button Unlock twice in a row and, when prompted, re-enter the Password of the Samsung account associated with the device: within a few moments, the tablet should forget all the data related to the security lock (face / fingerprints, passwords, PINs and signs) and immediately unlock the screen, making it accessible.

For security reasons, after completing this operation, I suggest you set a new secure unlocking method: you will find everything explained in the dedicated chapter of this guide. 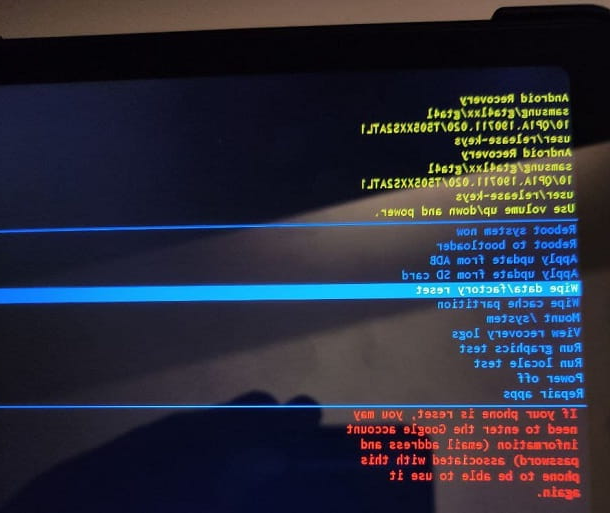 If the previous system did not have the desired effect (because you may not be able to use it), you can consider completely restoring the tablet using the Recovery: For your information, Recovery is an operating system independent of Android, capable of performing some emergency operations, including restoring the device. Most Samsung tablets have a basic recovery built in, so there is no need to manually install it.

By doing a recovery via Recovery, they come deleted tablet unlock data (password, PIN, biometric data, tokens and so on), but also all other data in memory: in fact, this operation returns the device to the factory state, ready to be reconfigured from the beginning.

As an anti-theft measure, following recovery via Recovery, you will need to specify the Samsung account credentials, to carry out the security recognition on the Knox system, and / or those of theGmail account configured previously, to pass the Android default check. Without this information, the tablet will remain locked and unusable.


Having clarified this aspect, let me explain how to proceed: first of all, if it is on, turn off the tablet completelyby pressing and holding the side button until you see the buttons appear on the screen Restart e Switch off. To proceed, tap on the latter twice in a row. Alternatively, press and hold the side button for about 10 seconds, until the screen goes black.

Now, to boot the tablet into Recovery, press and hold the key Volume Up and, without releasing it, press the side button, until the device turns on; when this happens, release the last key (while continuing to hold the key down Volume Up), until the writing appears Android Recovery.

Finally, use i volume keys to highlight the item Wipe data / factory reset, press the side button to confirm, perform the same operation on the item Factory data reset and press the again side button, to give final confirmation and start restoring the tablet.

Now you just have to exit the Recovery, selecting the appropriate item, start the device again and unlock its use by entering the associated account data, as explained above. 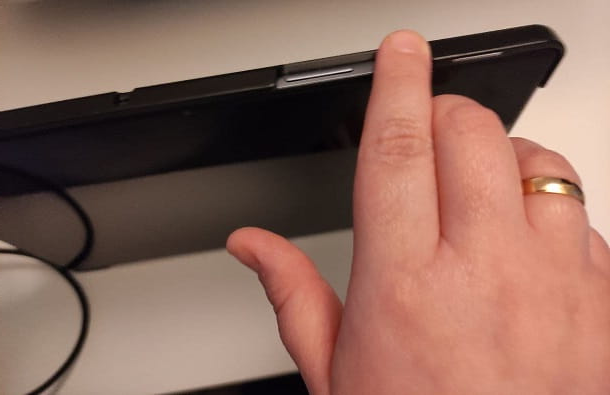 The tablet operating system Samsung got stuck due to an app you can't close and you don't have a clue how to unlock it? In this case, you have to perform what is called a forced restart.

Succeeding is very simple: first, locate the side power button of the device, then press and hold it for at least ten seconds, until the tablet turns off completely and turns on again automatically. Following this operation, which closes all applications in memory, the problem should be resolved.

If you are unable to forcibly restart the tablet following the procedure described above, try using the combinations side key + Volume down or Power key + Home key (if your tablet has one).

Were you able to get rid of the old tablet lock code and, now, would you like to define a new security system to protect the device? In this regard, it will be useful to know that you have a wide range of options that you can employ: one Password, an PIN, an segno or a biometric system (I return the digital stamp). 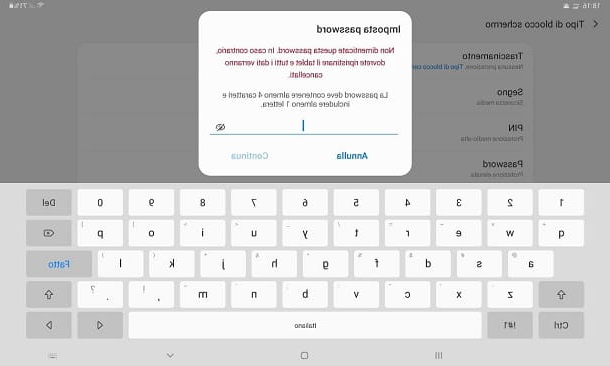 One of the safest unlocking methods is definitely the Password, as long as it is generated with criteria: therefore avoid using names, dates or other elements that can be easily "guessed" (such as that of your pet, for example) and prefer long and difficult to predict sequences, which include at least an uppercase letter, a lowercase letter, a number and, why not, a special character. If you need some advice on how to create a secure password, you can take a look at the thematic guide that I have dedicated to the topic.

Once you have chosen your passkey, you can set it on your tablet as follows: first, open the Settings of Android, by tapping on thegear resident on the Home screen, reach the sections Lock screen e Screen lock type and then tap the item Password.

Now, enter the unlock word choice in the appropriate field, tap the button Continue and, after entering it for a second time, press the button OK, to apply it.

How to unlock Samsung tablet with PIN 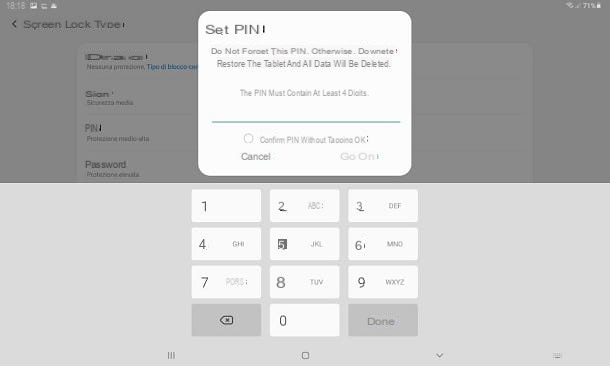 Another system that can be used as a release system is the PIN numeric: on Samsung tablets, this must contain at least 4 digits. I recommend, also in this case, to choose numerical sequences that are difficult to understand. Consequently, banned combinations such as "1234" or your date of birth: they would be practically useless!

Once you have chosen your personal code, go to the menu Settings> Lock screen> Screen lock type say Android, fai tap sulla voce PIN and insertion il code to be used, within the appropriate field.

Next, specify if confirm it without touching OK (i.e. immediately after pressing the last digit), using the appropriate text box, touch the button Continue and re-enter the PIN on the next panel. To finish and apply the chosen code, press the button Done. 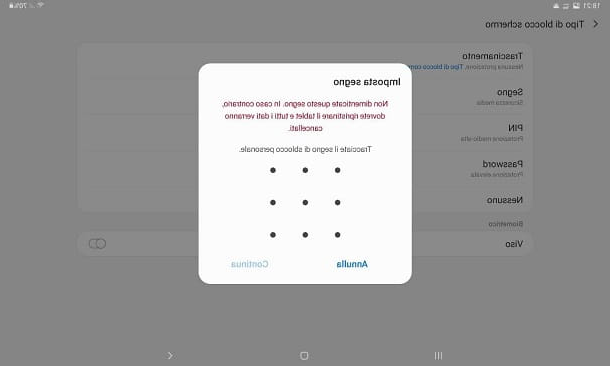 Another unlocking option provided by Samsung tablets (and, in general, most Android devices) is to draw a segno custom release, on a nine-point pattern.

This system, however, is of definitely lower security compared to the alternatives that I have proposed so far, because the sequence could be easily spied, memorized and reproduced by those who assist in unlocking the device.

How to unlock Samsung tablets with biometric systems 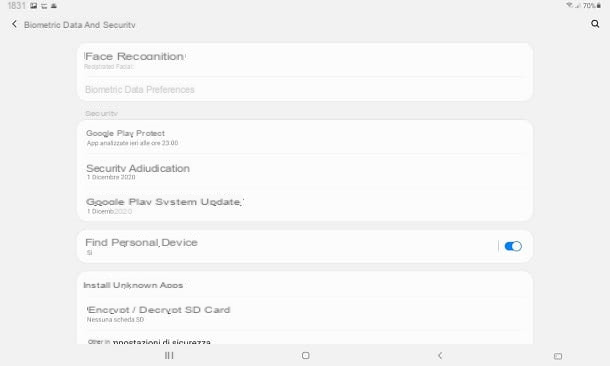 Another effective and safe unlocking method, available on many Samsung-branded tablets, is to use the biometric personal data, such as your own face or theFingerprint. The availability of one or the other feature varies based on the tablet model in your possession, but the steps to follow to activate the protection are quite similar to each other.

First, therefore, access the Settings of Android, touching the symbol ofgear placed on the Home screen or in the drawer of the device, tap on the item Biometric data and security and then on the release system you intend to use: Face recognition o Fingerprints.

Now, tap the button Continue and indicates the alternative traditional unlocking method to be used in case of unavailability of biometric data (password, PIN or sign); if you haven't defined one yet, you will be offered a wizard to define it, similar to the ones I indicated in the previous sections of this chapter. 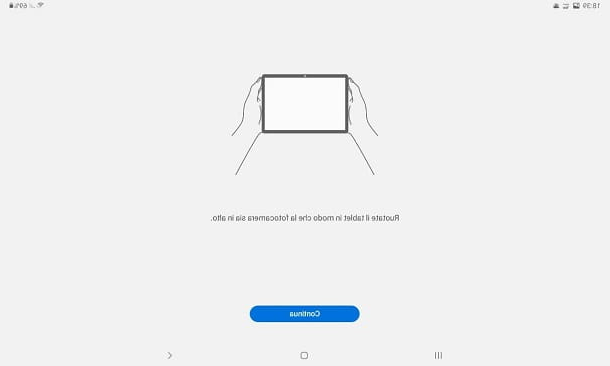 In any case, once the alternative unlocking method has been defined, follow the instructions that are proposed to you, to proceed with the registration of the data: if you have chosen to acquire a face, make sure the front camera is facing up, premium pulsating Continue and frame your face, to record it. Finally, choose if stay on the lock screen after recognition, by acting on the appropriate lever, and touch the button Done to register the face.

If, on the other hand, you want to register afootprint, place your finger on the sensor to start the procedure and, when requested, lift and rest your finger, even for several times. Now, hit the button Continue, proceed with the registration of outermost parts fingerprint and tap on the button Done, to acquire it.

To enroll more fingerprints, return to the previous screen and select the entry Add fingerprint; this operation is not possible for face recognition, since, in the current state of things, only one face can be memorized at a time.

How to unlock Samsung tablet

Audio Video How to unlock Samsung tablet
How to block Postepay ❯

add a comment of How to unlock Samsung tablet